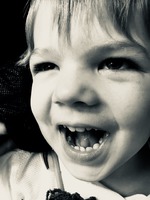 My name is Vid Marosi, foundation stone of "VIDd Tobbre"

I was born in August 23, 2014. Despite of challenging delivery (just like every delivery), I was a beautiful, cute baby and very healthy as per the medical release forms.

My parents were told by the doctors to put my feet in plaster as something didn't seem right, so they booked appointment for physiotherapy in the first few days after I was taken home. ...And they thought nothing worse can come!

On the physiotherapy sessions, we strengthen my legs and the bit weak neck muscles, but the mandatory checkups didn't result any other treatment.

When I turned 4-month, mommy realized something while I was eating. On the following day she noticed that little "stop" more frequently. They didn't know what it was, but they started to monitor me. On the third day, they called for the doctor and the emergency. Daddy is a doctor so he had some idea what it was but he didn't want to scare anyone. Unfortunately he was right and it was confirmed that I had epilepsy.

While I was examined in the hospital, everyone witnessed a new attack, therefore we were immediately sent to Neurology Department in Budapest. Since it was Christmas Eve, not many people were available. We were first sent to Heim Pal Children Hospital where Dr. R.B. set the diagnosis but to confirm that, she ordered a 24-hour EEG for the following day. As there were no nurses available, Mommy and Daddy had to help out and assist. On the next day, Dr. R. B. said that she had never seen such a bad EEG records and that she was right with the diagnosis, it is West syndrome. The worst one.

The medical treatment started on the same day. The medicines helped a bit, my condition became better as the length and intensity of the shocks decreased. While my treatment continued, my parents did their research and tried to make a plan what's next. Unfortunately, the medicines didn't help longer and within couple of days my condition worsened. As a result of the attacks, my muscles became so weak that every single time they diagnosed me with hypotonia. No-one really believed my Mom that it wasn't that...

After two weeks my parents managed to transfer me to the Neurology Department of Bethesda Children Hospital, where they started the ACTH steroid injection, which were the next set of treatment as per plan.

Dr. J.R. - who remained my specialist till today - didn't see the sign of West syndrome on the EEG made that day and ever since it's "only" epilepsy which stands on my medical release forms.

As a result of steroid treatment, my shocks disappeared on the following day, which is pretty rare according to my doctor. We were happy about it, weren`t we?

We were released after two weeks with the agreement that Daddy would give me the injections for 2.5 months, till the end of the treatment. I didn't have attacks. I became a little sumo man by March.

After we had returned home, we immediately started to attend early development sessions at Deveny, which was recommended by our doctor. However, I didn't like those sessions. My Mom was prepared that I would be crying but she wasn't told I would never stop it. She continued taking me for those sessions for a year while she was more and more certain that this was not the right treatment for me.

Meanwhile, we started an early development at "Budai Early Development" and with that parallel, at "Bethesda KIDSZ" and we remained with the later one. At this place I got special education and music therapy. My therapists are wonderful people, I really liked them. I slowly started to develop.

At the end of the steroid treatment, my doctor agreed to gradually decrease and then leave medicines behind in due to the better results on the EEG.

At the same time, I had bigger interest in outside world, my attention on certain things improved, my muscles started to developed, and it wasn't so difficult to hold my head anymore while lying on my stomach.

I learnt how to turn by the age of 1.

Shortly after that we could completely stop taking medicines as I managed to result a negative EEG. :) My parents didn't know how I could "cheat" to get this result, but this was just another thing which my parents couldn't explain - among many others - so my Mom simply thought I was an UFO :)

I was 1.5 years old when my terrible treatment ended at Deveny and we continued early development sessions, vision treatment, reflexology and we even went swimming at BHRG foundation.

There was a therapists that my parents wanted to get in touch with for a very long time who was a friend of our friend. People didn't know how she does her things, but it was known that she was very good at treatment because children recover attending her sessions. This therapist gave a call to Mommy that one of her sessions was cancelled and she could see me if she wanted to. Mommy, of course, said yes right away and she was very much looking forward to the meeting.

Judit was very nice from the very first moment and she also liked us. Mommy was glad that it was her opinion that she asked about and not the doctors' ones and she also believed her that there is so much in me. Then she couldn't resist me. :) She knew she has to provide treatment, she can't just send me away, we need each other. Mommy and Daddy needs her too. Till today she is our therapist and we are all very thankful for that. Slowly I started to open up.

I had better and worse days.

My mood can be very inconsistent but I'm always very happy to see Judit :)

We have been trying out many different things since then. We went for swimming that I really enjoyed however it's difficult to fit in our schedule currently, so we need to skip it.

We also tried a special acupuncture which seemed to be helpful at the beginning at the cost of a terribly pain, however results were only ephemeral.

Meanwhile, Mommy got pregnant with my little brother and my early development classes had to be continued at Tata. Even though we loved to attend "KIDSZ", this seemed to be a very good decision.

We met A. here who is a conductor teacher. That's when Mommy got to know what the conductive therapy is and how it differs from special therapy. There is a whole lot more movement in this therapy and that's what I needed. I improved a lot, I got better at completing exercises and my attention imporved a lot as well.

Then my Daddy heard about the hyperbaric oxygen therapy. This was something he was very interested in because in this kind of treatment, the body switches on its self-cure mechanism. This is a very simple but at the same time, very powerful treatment.

He quickly found out that we can try this in Budakeszi at the Hiperbar Centrum. We booked appointment for a consultation where she explained that in my case (where there is no exact diagnosis however I have epilepsy which previously was as showstopper for this type of treatment) she doesn't know what results I could have. As we haven't tried this yet, let's do this now :) Mommy was very worried how this would go but I did better than she did :) I didn't really like the mask at the beginning but after the end of the 20 sessions, I got used to it. As a result of this therapy, the most noticeable development I had was the improvement of my attention. I managed to make some friends here too. I met a little boy who moved to Hungary from Czech Republic. We made a lot of fun when we were in the chamber, I'm sure they miss us when we are not there. :)

Mummy had many conversations with his mom who mentioned her that they attend physiotherapy sessions at Olinek center which is also great. My parents did their research on the treatment and decided to give it a try. Soon after we booked time for consultation and started a 2-week long therapy. It was very tough, very intense and a bit different from everything what we had tried earlier. Furthermore, my therapist was Polish, and she talked to me either in Polish or in English and sometimes in Hungarian. Sometimes. We soon made friends with everyone, they really know what I can take and what I can't. Sometimes my false hisses didn't help as they saw those wasn't real... this is a bit cruel. Beside the intense physiotherapy, I also attend sensory motor physiotherapy, hand therapy and Tomatis therapy (which improves motor emotional and cognitive abilities through music and language).

My brother always comes with us who is very sweet as he makes me laugh all the time. He is always full of energy and nothing can stop him. Even I can't. I already got used to the fact that he overrides me and I would love to go to play with him. He brings me toys, give them to me but my hands don't function very well so I can't always grab them. But I'm improving and there are less and less things that I forget about.

Unfortunately I also have a digestive issue that might be a result of less movement, not drinking enough or can be just a result of some neurology disorder. My parents believe that this digestive disorder is the base of all my other problem. We have tried to explore many things around this issue too and how we could make it better, but we haven't found solution yet. We trial with different vitamins, diets. Unfortunately, it causes me stomachache which makes my days miserable, especially if I also have to exercise.

So, if someone has read through this till here, you can see how much we have gone through in the last 3.5 years and there are many things we haven't even mentioned.

Till today it's a mystery what has happened to me, why I can't tell people what I would like to, why I can't crawl or walk and why I can't hold a glass and lift it to my mouth to drink from it. But for some reason I was sent here from a different planet, (just so my mommy would be right too J ) and my parents do their best to teach me how to live on Earth.

My humor can't be questioned, and this is one of the things why my parents believe in me.

"Just because something doesn't do what you planned it to do doesn't mean it's useless." (Thomas Alva Edison)

We use cookies to enable the proper functioning and security of our website, and to offer you the best possible user experience.

You can customize your cookie preferences here. Enable or disable the following categories and save your selection.